Eleanor Scott (1892~1965) was born Helen Madeline Leys in Middlesex, the daughter of John Kirkwood Leys, barrister and novelist. Her early education was provided solely by her mother, Ellen, who prepared both of her daughters for going on to Oxford. After the Great War, Helen Leys became a teacher, later rising to the position of Principal of an Oxford teacher training college. Her first short story to appear in print was ‘The Room’, which appeared in The Cornhill Magazine in October 1923, credited to H. M. Leys. In 1928, the first work bearing the pen name Eleanor Scott appeared: the controversial novel War Among Ladies, which was published by Ernest Benn. None of Leys' books seem to have done terribly well. Her final novel, Puss in the Corner, which was published in November 1934, received favourable reviews, but faded into obscurity like her previous books. I believe that Leys also used the pseudonym Peter Redcliffe Shore, under which she wrote two mystery novels, both published by Methuen & Co., The Bolt (1929), and The Death Film (1932). 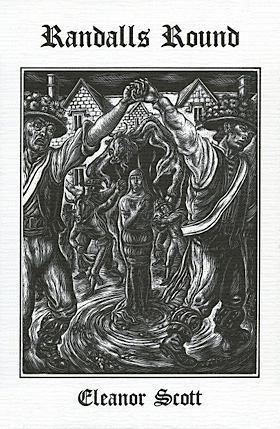 Randalls Round was first published in the autumn of 1929 by Ernest Benn, bound in black cloth with gilt lettering and priced at 7/6. A cheaper edition was published in 1931, as part of 'Benn's 3/6 Library', in red cloth with black lettering. They are both so hard to find that I've never seen a copy of either up for sale. Ash-Tree Press issued a limited edition in 1996, and that's the one I've read (see cover image right). According to the author's foreword, all of the stories in the collection were inspired by dreams: 'It may be that simply because these things were so terrifying I have failed to convey the horror I felt. I do not know. But I hope that some readers will at least experience an agreeable shudder or two in the reading of them.' Well, I received a fair bit more than an agreeable shudder when reading these tales, I can tell you! The stories included in this collection are: ‘Randalls Round’, 'The Twelve Apostles', 'Celui-là', 'The Room', 'The Cure', 'The Tree', 'At Simmel Acres Farm', 'Will Ye No' Come Back Again?', 'The Old Lady'.

All of the tales are good and creepy, and this is one of my favourite collections so I like all of them, but I feel that three of the stories really do stand out. The first is ‘Randalls Round’, in which a fellow called Heyling pays a visit to Randalls, a small village in the Cotswolds. On his first night there, he hears children singing a folk song outside the inn where he is staying, then a little later he hears the same tune being played on a flute as people congregate in the market square. In the centre of the square stands a pole, with the shaggy hide of some animal thrown over it, with a heavy head and short horns. Men begin to dance, then they form a ring facing outwards and begin to move widdershins. It turns out that the dance used to be performed around Randalls Bank, a local tumulus formed by a long barrow, the dance’s origin being almost certainly sacrificial. Heyling tries to get permission to explore the Bank, but the owner will not give it. So he decides to dig there without permission... after dark, on All Hallows’ Eve.

In 'The Twelve Apostles', a wealthy American by the name of Matthews buys Barton Cross Manor. Wanting to know if the house is haunted, he is taken to see Mr Molyneux, local vicar and antiquarian, who tells him the story of Sir Jerome, the private Catholic chaplain of the Squire of the Manor during the early reign of Elizabeth I. Jerome was a chemist, credited with witchcraft and demonology, and following his death in 1562 there were strange happenings on the day that he was buried. Some years later, the manor was sacked, and a treasure seeker was found dead in the passageway close by Jerome’s room. Not put off by the history of the house, Matthews decides to go hunting for that missing treasure... at night, in the dark.

In 'Celui-là', Maddox is staying in Kerouac, on the Breton coast, with the local curate. He is taking his usual evening walk along the beach when he encounters a stange figure who is digging in the sand with its hands. Maddox approaches, but the figure runs away at speed. He investigates and finds a small box, covered with carvings, that contains a piece of parchment. Once back at the curate's house, Maddox reads the Latin contents of the parchment aloud. If you're familiar with the stories of M. R. James (and if you're not, you should be!), this one will call to mind 'Oh, Whistle, and I'll Come to You, My Lad'.

As I said, I've never seen a copy of the first or second edition for sale, so your guess is as good as mine when it comes to the price of those. The Ash-Tree Press edition sells for around £120 in fine condition (that's about $195 at the moment). There is, however, a new paperback edition by Oleander Press that costs less than ten pounds. I can't vouch for the quality of the paperback, as I've not read it. 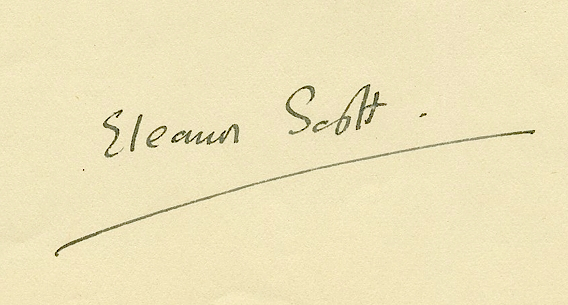 I bought this from a reputable ephemera dealer a while back, and it is apparently Eleanor Scott's autograph. I can't find another to compare it to, so I currently have no way of verifying that. The paper's the right age, and it looks like it was removed from some autograph hunter's scrapbook.
Posted by Gina Collia at 6:01 pm

'A fig for men and women who brag of what they do not believe!... if he can't believe because he cannot imagine anything that he cannot handle, what shall we say of him but that he is an intellectual cripple?' ~ Augustus Jessopp (The Dying Out of the Marvellous).
'No live organism can continue for long to exist sanely under conditions of absolute reality; even larks and katydids are supposed, by some, to dream.' ~ Shirley Jackson (The Haunting of Hill House)